Guy Schraenen (born 1941 in London; died 2018 in Paris) was the founder of the Galerie Kontakt, of the publishing house Guy Schraenen éditeur and of the Archive for Small Press & Communication (A.S.P.C.). He has also been an investigator and author of essays and various publications. His various projects focused primarily on the many forms of artist publications of the various international avant-garde and independent art movements of the late 1950s to 1980s. As a producer, publisher, distributor, collector, curator, and investigator, he was probably the only protagonist to deal with this genre of art in all possible roles - making him an important link between artists, institutions, and the public.

In 1965, Guy Schraenen opened the Galerie Kontakt in Antwerp, which he ran until 1978. In the first years the gallery specialized in Lyrical Abstraction and Constructivism. After some years, it played an important role in introducing artists of the new avant-garde movements such as visual poetry, sound poetry, sound art, conceptual art, Fluxus, mail art and artists' books.

The intention of reaching a wider public and at the same time breaking new ground in the field of art led to the founding of the publishing house Guy Schraenen éditeur in 1973. It was based in Antwerp, but collaborations were organized with an equally large number of artists in Paris. From the outset it was important to Guy Schraenen to publish works of art based not only on image and text, but also on sound. Until 1978 he published books, magazines, catalogues, postcards, multiples, posters, records and films by artists who had full freedom to conceive and produce their works.[1] The multimedia Revue AXE[2] by Guy Schraenen éditeur was described by the French poet Bernard Heidsieck with the following words: "Yes, he had always great sense of implementing things with a great taste and a professionalism, although this is done with very simple facilities. There were only three issues but everyone is fine, one with a cover from Degottex, the other from Brian Gysin, and each time he approached objects or publications, he did it with great ingenuity and great sophistication."[3]. Affiliated to the publishing house was the Printing Workshop which served as a very early artist residence. Artists were invited to explore and realize screen prints, small offset publications, and reproduced works, among other things. For many of them it was the opportunity to publish an artists' book for the first time.

Guy Schraenen éditeur publications have been regularly presented in solo exhibitions, group exhibitions and thematic exhibitions in his gallery as well as in collaboration with art institutions in many countries. He has also been invited to present his books at Art Basel and Art Frankfurt. As a member of United Untied, an international publishing group, he exhibited his artists' publications together with Boekie Woekie Amsterdam, Edition Hansjörg Mayer, Edition and Gallery Hundertmark, Rainer Verlag, Stop-Over-Press and Wiens Laden & Verlag at the Frankfurt Book Fair.

Due to the lack of interest of institutions, critics and art historians in the art genre artists' book at that time, Guy Schraenen éditeur was no economic success. Nevertheless, the intention to cross the boundaries of an institutionalized gallery and reach a broader public proved fruitful. The main reason for this was the independent network scene of pioneering artists who bypassed the established art system in the 1960s and 1970s across national and system borders. Thanks to an active participation, Guy Schraenen's artists' publications were exchanged with art works by thousands of artists. The resulting rich and diverse collection of published art works gave rise to a new project, the Archive for Small Press & Communication (A.S.P.C.), which he directed together with Anne Marsily from 1974 onwards.[4] As formulated in his Manifesto, the Archive "...sought to collect and preserve all kinds of art documentation, mainly originating from artists' initiatives and covering all areas in which the contemporary artist is active."[5] Accordingly, it covered a broad spectrum, not only printed matter, but also sound art. As such, it represents the main trends and practices of the sixties, seventies and eighties, including Body Art, Mail Art, Land Art, Fluxus, Conceptual Art, Minimalism, Pop Art, Performance, Visual Poetry and Concrete Poetry.

From the very beginning it was important to Guy Schraenen to make his archive accessible to the public. To ensure this, he organized exhibitions, performances, screenings, and lectures, initially at the Galerie Kontakt and after moving in 1979 to a new location in the adjoining Archive Space.[6] Numerous essays and lectures as well as his radio program I Am An Artist also served this purpose. All this was organized on individual base and in collaboration with artists, artists' run spaces, museums and cultural centers in Belgium, France, Germany, Italy, the Netherlands, Poland, Portugal, Slovenia, Spain, Hungary, the Soviet Union, etc. A very important aspect of his activity has been the development of a close relationship with the art scene in Latin America and Central Europe. The Polish artist Józef Robakowski commented Guy Schraenen's engagement in Poland in the 1970s: "Our contacts were broken mechanically. Letters were controlled and all parcels destroyed. But soon Guy Schraenen from Antwerp, an independent publisher, helped to cooperate with us very actively. This contact was extremely helpful as far as the exchange of information beyond official, institutionalized channels was concerned."[7]

The archive reflects a period of approximately twenty years of independent creation by artists who developed new languages and new ways of disseminating works of art and ideas to an audience no longer satisfied with traditional art cycles. For Guy Schraenen it is both an artistic and a political statement.[8]

A Museum Within a Museum

In 1989 Guy Schraenen became founding curator of the artists' book collection A Museum Within a Museum at the Museum Weserburg Bremen, the first autonomous department of its kind. Including published art forms of the 20th century, it expanded the concept of the Gallery of Prints. "Never before have artists' books been considered and presented as works of art, alongside paintings, sculptures, graphics, environments and installations in a museum."[9]

Shortly afterwards, Guy Schraenen was asked to find similar collections at the Fundação Serralves in Porto, at the Museu d'Art Contemporani de Barcelona (MACBA), at the Royal Museum of Mariemont and at the Mednarodni grafični likovni center Ljubljana (International Centre of Graphic Arts), as well as advising the collections of other institutions such as the Museo Nacional Centro de Arte Reina Sofía in Madrid. Of these collections, he organized numerous thematic and solo exhibitions in these institutions.

The Archive for Small Press & Communication (A.S.P.C.) remains an important contribution to the knowledge of the international art scene of the 1960s and 1970s.[10]

In 1999, the A.S.P.C. Printed Works Section, consisting of a fund of more than 50,000 documents representing works by several hundred artists from more than 25 countries, was acquired by the Centre for Artists' Publications at the Museum Weserburg Bremen. Previously, a selection of works and documents equipped the exhibition "Out of Print", which travelled from the Museum Weserburg Bremen (Germany) to a number of major museums in Europe.

The Section Sound Art of the A.S.P.C. was acquired by the same institution in 2017. This Sound Collection Guy Schraenen is internationally the most important and comprehensive collection on Sound Art, comprising almost thousand artist's records, audio CDs and audio cassettes as well as prints, graphics, photos, scores, posters, maps, object records, sound objects, multiples and individual pieces. Comprehensive documentation and an extensive bibliographic section complete the collection. The sound collection was also presented in many exhibitions in the Museum Weserburg Bremen, The Museum MACBA Barcelona, The Museum Serralves Porto, La Maison Rouge Paris, The Garage Museum for Contemporary Art Moscow. The overview introduced both a new perspective on sound experiments by artists and a new market for the format of vinyl records. The detailed accompanying catalogue is now a reference work. Together, the two collections form the cadre of the Centre For Artists' Publications in Bremen, a cooperation between the University of Bremen and the Museum Weserburg Bremen, the most comprehensive collection of published works of art in Europe.

The publications of Guy Schraenen éditeur can be found in all major artist's book collections all over the world. 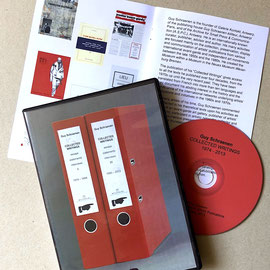 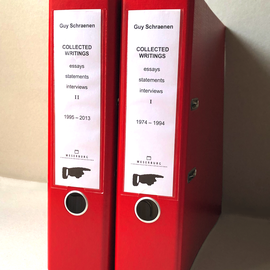 Guy Schraenen’s “Collected Writings” give access to all the texts he published over four decades, from the 1970s up until the very recent past. They document his abiding interest in the history and the significance of the international networks underlying artists’ publications and initiatives in the 1960s and 1970s. He reflects upon the socio-political and cultural strategies of the artist-initiated art scene, which remained independent of the official art establishment.

The writings are presented in the form of facsimiles of the original publications. Most texts are in English, some in French, several also in other languages. They are available in two versions:

* C: exhibitions with a catalogue

9. Deecke, Thomas (2001). Ein glückliches Treffen. In: Newspaper on the occasion of the exhibition Out of Print. Bremen: Neues Museum Weserburg. p. 3.

FOR ANOTHER APPROACH TO ART HISTORY