For the exhibition Reading List. Artists' Selections from the MoMA Library Collection, the artists' book Diario No. 1 by Mirtha Dermisache published by Guy Schraenen éditeur in 1975 is selected.

MoMA: "What is your favorite item in the MoMA Library Collection? Why?"

Martha Wilson: "Mirtha Dermisache, Diario No. 1: ano 1 was published in Argentina in 1972, during the years when people were being “disappeared” by the government. It is a tabloid publication which appears to be covered with meaningless gibberish, or perhaps graffiti or calligraphy practice. It made it past the censors because they did not understand that Mirtha was drawing a portrait of the nonsense that passed for news in government-controlled newspapers. Consequently, this work stands as a visual protest of Argentina’s oppressive political regime."

The lecture will focus on the activities of the Archive for Small Press & Communication (A.S.P.C.) founded in 1974. Its aim was to collect, preserve and present the patrimony built up by people, active from inside and not from outside the art scene, to be the witness and memory of actions independent of all powers. Artists' publications were a unique medium in this period of cultural and social evolution. Still they are the most radical way to approach art.

DIETER ROTH AND THE MUSIC. DISCOGRAPHY

Exhibition catalogue on occasion of the exhibition in the Kunsthaus Zug and the Hamburger Bahnhof Berlin, edited by Edizioni Periferia Luzern, 2014

On the occasion of the exhibition AND AWAY WITH THE MINUTES. DIETER ROTH AND MUSIC a catalogue is published with the essay by Guy Schraenen: "An attempt to write a text about Dieter Roth's record covers... and several additional thoughts."

The relationships between art and architecture can be the object of infinite declensions: the experiments carried out by Soviet constructivists and suprematists and, later on, by minimalist and conceptual artists, are but two examples of the constant transfusions between the two disciplines that have shaped twentieth-century art. ‘ARTchitecture’ features some of the ways of approaching this theme. Through collage, photomontage, photographs, films, drawings, plans, maps, objects and sound pieces, the artists in this exhibition propose a series of utopian projects that are particularly critical of current architectural and urban planning practices.
The exhibition brings together works from the Collections of Artists’ Books and Publications of the Serralves Foundation and the Bremen Museum and is articulated around the work of Belgian Luc Deleu and American Peter Downsbrough, both of whom authored a body of visual work profoundly anchored in their academic architectural training and subsequent studio practice. ‘ARTchitecture’ features works by these artists - more specifically, the recordings of their intervention in the public space - as well as of others who have contributed to a critical reflection on the contaminations between art, architecture and urban planning and who have alerted us to the grandeur and misery of the architectural world that surrounds us: Bernd & Hilla Becher, Daniel Buren, Concha Jerez, Sol LeWitt, Edmund Kuppel, Gordon Matta-Clark, Elisabeth Neudörfl, Ed Ruscha, Richard Serra, Jessica Stockholder and Antonio Vigo, among others.

IT IS OVER BUT YOU DON'T KNOW IT YET

Organized by the School of Fine Arts, University of Porto

GAC Centennial and other projects

The Italian artist Guglielmo Achille Cavellini (GAC, 1914-1990) cultivated a lively exchange with numerous artists. In the frame of his “self-historification” he published artist’s books, documents, postcards and postage stamps in very large editions. On a widespread sticker in the Italian colours he announced his centennial exhibition in Venice. In Cavellini’s honour, the Centre for Artists’ Publications presents a choice of GAC’s works from the Archive for Small Press & Communication. The exhibition is curated by Guy Schraenen. It includes further projects based on international artistic communication via mail.

Cavellini followed a clear artistic strategy: “Generally, the gifted artist is recognized and appreciated as such only after his death. From that moment onwards, the interest for his work and his personality becomes general. Researches are made among the papers and photographs of his existence. I don’t want this to occur for me and my work. I myself am therefore collecting and presenting all that concerns me.”

Published by the Centre for Artists' Publications, Bremen, 2013

Available as digital version (DC) and as print version (2 volumes) 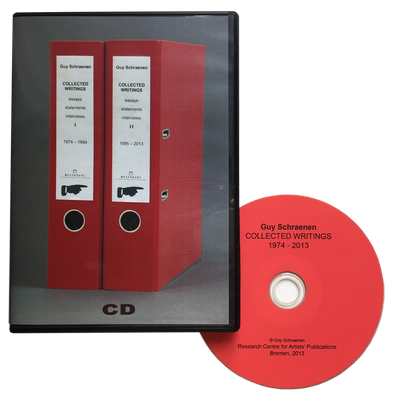 The publication of Guy Schraenen’s “Collected Writings”, available as print version and as digitalized deition on CD, gives access to all the texts he published over four decades, from the 1970s up until the very recent past. They document Guy Schraenen's abiding interest in the history and the significance of the international networks underlying artists’ publications and initiatives in the 1960s and 1970s. He reflects upon the socio-political and cultural strategies of the artist-initiated art scene, which remained independent of the official art establishment. Beside this, many texts for catalogues of thematical and individual exhibitions are documented in this publication.

The writings are presented in the form of facsimiles of the original publications. Most texts are in French and English, several also in other languages.

JOURNEY TO THE END OF COLOUR: BOOKS AND PRINTS

In the history of art making, colour has traditionally been used to accentuate the representation of subjects. The present exhibition, ‘Journey to the End of Colour’, reveals the role of colour in the service of an idea. The visual perception of a colour having many options, even without any figurative image, colour as such can create a large spectrum of evocations; likewise, word compositions printed in black can produce the mental image of a specific colour.The aim of this exhibition is to guide the viewer through a colourful labyrinthine universe and to instigate his/her own interpretations. On display will be artists’ publications dating mostly from the 1960s and 1970s, a period when conceptual art and visual and concrete poetry were taking central stage in the global art scene. They range from all white, all black, or monochrome to polychrome pieces; from the arbitrarily coloured, to pieces whose specific colours denote a precise notion.

The presented examples illustrate that the use of colour and the inventive reconfiguration of the conventional format of publications are as infinite as the painter's palette...

Additional information: Journey to the end of colour

Guy Schraenen presents his publications and catalogues at

For Another Approach to Art History